Petroglyphs of Sarmyshsay: at the crossroads of times

The cave drawings of Sarmyshsayin the Nurata region are one of the most outstanding sights of the region, and of Uzbekistan in general. More than 3000 images of different epochs are presented here. As the research data showed, most of them belong to the Bronze Age.

In order to see these cave drawings, you need to drive about 40 km from the city of Nurata, to the Sarmysh gorge.

Drawings on rocks mainly represent animal hunting scenes, as well as episodes from the life of a primitive man. Looking at petroglyphs, one can fully imagine the diversity of fauna that existed in these parts in ancient times. They depict bulls, mountain sheep, goats, wild boars and other animals.

In addition, there are many images of people performing rites unknown to modern man.

It is interesting that all the drawings are made with the help of different materials. This fact confirms that they were made in different centuries. In particular, a number of images are drawn with ocher mixed with subcutaneous fat of animals. Other petroglyphs were literally carved on the surface of the rocks. 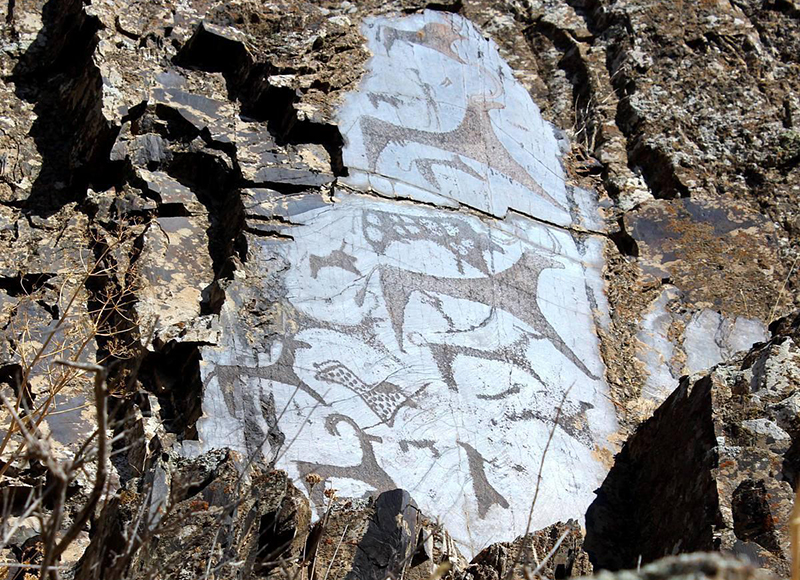 What is so interesting about petroglyphs?

Today, you can see images made in the Stone Age. Hunters surrounded by various animals are depicted on them most of the time. Figures representing different rituals refer to a later period. Drawings of dogs, sheep and camels also represent a later period of time. Apparently, the images were taken during the first attempts of people to domesticate animals.

The meaning of some images of an abstract nature, scientists cannot interpret to this day.

There are also images drawn during the Scythian period. They depict (presumably) rulers of that time, as well as soldiers.