On the territory, dedicated to Zahiriddin Muhammad Babur, the great ruler, there is his House Museum. There is also a memorial - a tomb where the earth from Agra and Kabul, the places of a burial place of a commander, have been brought and buried.

The Museum has a large number of rare exhibits and an exquisite exhibition that tells about the life of Babur - the Great Mogul Emperor, his family and activities, as well as about his flaws. In the museum there are miniatures from the life of the Baburids, diplomatic correspondence, various gifts. In addition, here you can see the literary works of Babur, the works of his children, for example his daughter. 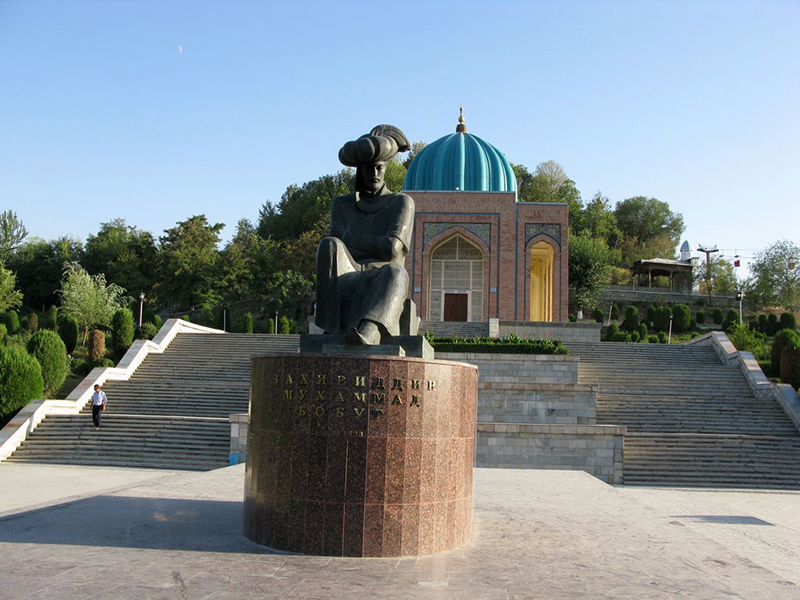 The daughter of Zahiriddin Muhammad Babur, Gulbadan Begim is the heir to his father's literary gift. Also, like Babur, Gulbadan-begim invested much in treasure in the culture of the east.

All guests of the Babur Museum can listen to information about the life of the Baburids. Around the museum there are a lot of various plants. It is especially beautiful in the spring and summer time of the year.

Outside, the museum is decorated with traditional national patterns of blue and white, the top is decorated with a blue dome. At the entrance, all visitors to the museum are greeted by the sculpture of the commander, sitting in a pensive posture and reflecting on something. Local residents say that it was here that Babur spent most of his free time, and he usually surrounded himself with books, and sometimes just admired the city and reflected on something.

The museum is visited not only by tourists. It is often visited by schoolchildren and students on excursions. Museum staff shows them through the building showing exhibits, telling stories from Babur's life and answering all questions. The house museum of Zahiriddin Muhammad Babur must be the first in the list of places to visit in Andijan.