Only villages with a mosque were called cities in the middle of the XIX century. That is why the construction of the most magnificent mosque in the Fergana Valley was started in Andijan.

The construction of the madrasah began in 1883 and lasted for 7 years. The area of the complex reaches 1.5 hectares.

The complex consists of a minaret, a mosque and a madrasah. Also there is Museum of Art and Literature of Andijan region on the territory of the complex.

Madrasah with its beauty both outside and inside is always admired by the tourists. This building is the pride of the city, it is called "the pearl of medieval art of Andijan". 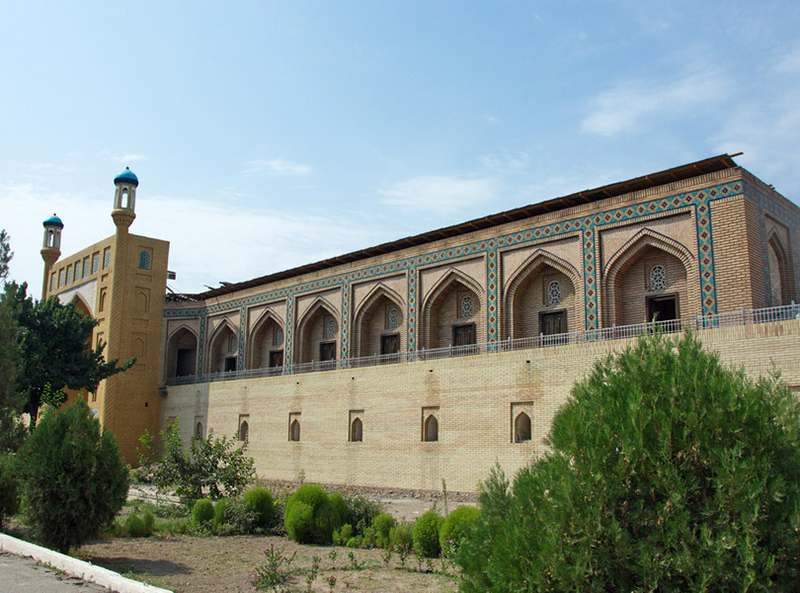 The facade of the complex Jami is decorated with a traditional Fergana portal. The mosaic decoration of blue colors on the walls shows intricate patterns in the traditional style.

The original construction of the madrasah was U-shaped. After the earthquake in 1902, the "wings" of the building collapsed, so only the main façade survived to this day.

Lattices inserted in the window openings are carved from a tree with an intricate pattern and are the main decoration of the building from the inside. It is impossible not to pay attention to the skillfully executed artistic carving on wood, which is very typical for the masters of the Fergana Valley. The Juma Mosque ceilings (Friday Mosque) are decorated with unique patterns in the traditional style. The entrance arch is decorated with inscriptions from the Koran, and the domes of the building are also painted in dark and light blue.

The mosque is operative nowadays, every Friday.

There is a pond in the courtyard in front of the minaret, as well as a small shady park.

This architectural work certainly causes great interest among tourists, primarily for its uniqueness and history. One can endlessly admire the beauty of architecture immersing mentally in the Middle Ages and the way of life of the Uzbek people. Tourists who visited these historical memorabilia are given the opportunity to fully experience the beauty of the local color.

Tours that include Jami Mosque in Andijan