Andijan, one of the most beautiful modern cities in the Fergana Valley, is considered to be a large industrial megapolis of Uzbekistan, famous for its virtuosic artisans: in pottery, in exquisite ceramic modeling, embroidering with gold threads, in copper coining. Works done by the skillful masters of Andijan, are known not only at home but throughout the world.

During the existence of the city, a huge cultural heritage was formed. The most diverse items of the ancient period, sculptures, paintings and literary creations were found here. 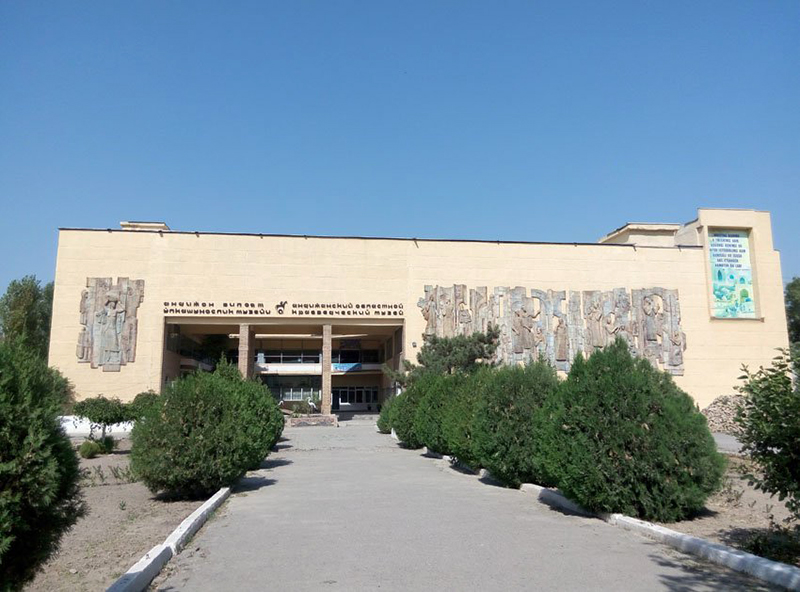 All copies are researched by scientists and stored in the Andijan Museum of Local History. There are more than 60 thousand samples. They clearly tell the history of the formation, development and habitat of the inhabitants of the Fergana Valley. Here, the historical origin of the city of Andijan is also imprinted, where the famous and revered commander Bobur was born and grew up. In his honor the future generation erected the Memorial House-Museum of Bobur.

In the Andijan Museum of Local History, the collection of exhibits is divided into different directions: ethnology, fine arts, applied skill, archeology and others.

The museum has a rich collection of various historical objects that tell about the life of the people of the Ferghana Valley at various intervals of history. Also in the museum you can see the exhibits of stuffed animals that lived in the Ferghana Valley in those remote times. In addition, the museum houses the works of modern skilled craftsmen of the Fergana region, who are trying their hardest to revive the crafts of ancient masters.

Museum exhibits are being replenished all the time. The museum carries out various exhibitions, in the Fergana Valley and beyond.

Every year the local history museum of the city, like other museums of the country, exhibits its best exhibits at the exhibition, which is held in the Fine Arts Gallery of Uzbekistan. Visiting the Andijan Museum of Local History, you will learn a lot about the history of the Fergana Valley and get acquainted with the skill of the craftsmen of the Fergana region.