Holidays and Festivals in Uzbekistan

As in any country, Uzbekistan hosts many holidays and festivals. Days of holidays are considered days off. These days there are folk festivals, various cultural events, designed in the appropriate theme of the holiday. The main holidays of Uzbekistan can be divided into state holidays, international, traditional religious, as well as cultural festivals. All of them call for the unification of people through the recognition of themselves as part of one nation, one faith, one culture. 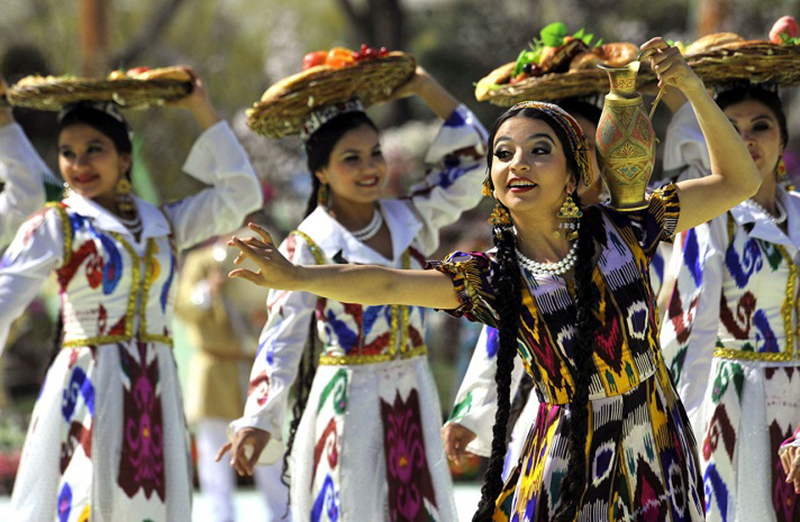 Independence Day (September 1), Teacher's and Mentor's Day (October 1), Constitution Day (December 8), Defenders of the Motherland Day (January 14), Day of Honors and Glory (May 9) - a special day when the feat of the Soviet people, including many Uzbeks, is remembered. On this day veterans of the Great Patriotic War (World War II) are honored. People bring flowers to the eternal fire at the monument of the Sorrowful Mother, solemn marches are held. Among the international holidays, the most famous are the New Year (January 1), and the International Women's Day (March 8).

Uraza-Bayram (Eid al-Fitr) - is held after the holy month of Ramadan, during which the faithful keep fast (Uraza). On the day of the graduation, people congratulate each other, visit relatives, festive preparations are held in the houses, tables are laid.

Kurban-Bayram (Eid al-Adha) - on this feast the rite of sacrifice is performed (according to custom, a ram is sacrificed), believers perform services in mosques, commemorate the dead. On this day, people give alms, and by tradition, families of neighbors, relatives, friends treat each other and give gifts.

Navruz (March 21) marks the spring equinox. It is a holiday, rooted in the distant Zoroastrian past of ancestors. Spring is a time when nature blossoms again, therefore according to the Zoroastrian custom Navruz ("New Day") is the coming of the new year. According to custom, sumalak is prepared in advance for this day - a delicious and wholesome dish of sprouted wheat.

Cultural festivals are one of the most interesting, fun and educational events. Despite the fact that we perceive the culture of Uzbekistan as something integral, each of the regions has some characteristic feature - in clothes, in music, in language, customs and so on. Indeed, each region, while remaining a part of one country, is a special distinctive land. You can find out all this by visiting this region or visiting festivals, where participants and spectators from Kazakhstan, Turkmenistan, Kyrgyzstan, Tajikistan, Russia, China, India, Pakistan, Afghanistan, Iran, Turkey, Indonesia, Malaysia, the Philippines , USA, Great Britain, France, Germany and other countries.

Among the most famous festivals in Uzbekistan are:

Baysun Spring ("Boysun bakhori") is an international folklore festival, named for its venue. Baysun is a mountainous area in the region called Surkhandarya. Since 2001, Baysun has been listed by UNESCO as "Masterpieces of the oral and nonmaterial Heritage of Humanity". The epic about the Uzbek hero Alpamysh ("Alp" - hero) was folded here. In the open air, among yurts you will be familiarize with the peculiarities of the local way of life, music, dances, folklore and much more.

"Eastern Song" festival ("Shark Taronalari") is an international music festival. It has been held since 1997 in Samarkand. During the festival, the beautiful Registan Square becomes a place for the unification of the heritage of the East and the West cultures. From all corners of the world here - in the pearl of Central Asia - musicians, singers, representatives of folklore culture gather. In this sense, we can say that Samarkand has not lost its potential as a unifying center, as it was centuries ago, when traders from different countries met here. Dozens of flags from the countries of Asia, Europe and America and hundreds of creative teams present here the whole beauty of their culture.

Festival "Silk and Spices" in Bukhara. If you have ever been to Bukhara, then you probably paid attention to the abundance of craftsmen, workshops, shops, which show the diversity of products of various craft schools. All this suggests that Bukhara is a heritage of creative active people’s focus.

"Echo of Ages" festival ("Asrlar sadosi") is a festival of traditional culture, where the beauty of folk customs and traditions, applied art, national cuisine and music is presented. It takes place every time in different cities of Uzbekistan. Annually the festival gathers more than a thousand participants: folklore collectives, artisans, athletes, musicians, cooks and tens of thousands of spectators - tourists and residents of Uzbekistan.

As you can see, the common feature of the festivals is that they always present national traditions of all directions: costumes, crafts, arts, cuisine and much more. At festivals you can see bright musical, dance performances, traditional games and competitions, original costumes. You taste delicious dishes of national cuisine, as well as purchase unique souvenirs at exhibitions and fairs.