The uniqueness of the historical places of Uzbekistan is that they preserve the elements of the past centuries through which you can come into contact with the past, as they reconstruct the atmosphere and aesthetics which you hardly ever will be able to meet. Where else can you feel this unique atmosphere - the atmosphere of the ancient and medieval East?

The lands of Uzbekistan preserve the memory of great times and great events. Like natural cycles, periods of the prosperity of civilizations were followed by periods of their decline. Trade, intellectual and cultural exchange in peacetime and cruel periods of wars, resettlement of peoples, cooperation and confrontation of sedentary and nomadic cultures - all this eventually brought new features and contributed to the transformation of the cultural image and lifestyle of the people who inhabited this territory. It wouldn’t be an exaggeration to say that Uzbekistan is the heart of the Great Silk Road, since it was the Sogdian merchants who were the connecting link of silk trade between China on the one hand and Iran and the Roman Empire on the other hand. 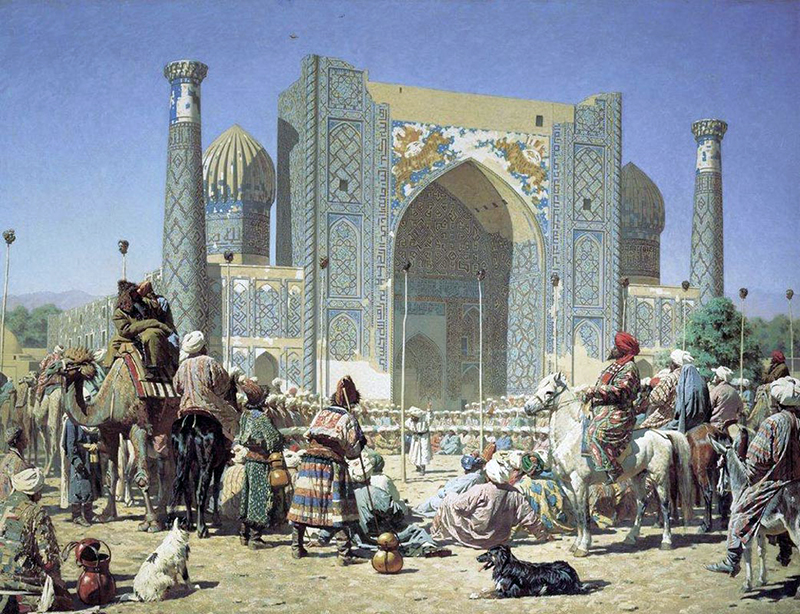 In different historical periods, the modern territory of Uzbekistan:
- was incorporated into such states as Sogdiana, Bactria and the ancient state of Khorezmshah,
- experienced the Persian domination and campaigns of Alexander the Great, the Turkic Khaganate, the Arab conquests and the invasion of Genghis Khan with the subsequent formation of the Chagatai ulus,
- witnessed to the prosperity of the Amir Timur empire and the rule of the Timurids, the arrival of nomadic Uzbeks and the accession of Sheybani Khan, the formation of the Bukhara, Khiva, Kokand khanates. - finally, it was part of the Russian Empire and the Soviet Union until 1991, when Uzbekistan declared its independence.

You can imagine what a unique fusion of cultures has been formed here for centuries.

Therefore, for a guest who has come to get acquainted with Uzbekistan, it will be remarkable that the elements of the cultures of the past times are still present in the customs. For example, the Navruz holiday (Persian “New Day”), or the customs associated with the use of fire, still being preserved in some areas tell us about the distant times of Zoroastrianism. Or burials according to the Zoroastrian custom - above the ground.

The mosques, minarets and mausoleums that have survived up to this day, as well as sacred places represent the monuments of the prosperity of the Arabic-speaking culture, the period of which tends to be called the Eastern Renaissance. In addition, a great number of scientists-encyclopaedists, eminent scientists, whose monuments you can see in a variety of cities. These are Abu Raikhan Beruni, Abu Ali ibn Sina, Al Khorezmi, Al Farabi and many others. In the art gallery in Tashkent you even have the opportunity to see a unique Buddha statue carved in the manner of a Sogdian epoch man.

Having traveled around the country, having visited the famous cities of Bukhara and Samarkand, which originate from the depths of centuries BC, you as nowhere have the opportunity to come in contact with the times of great events and their monuments, such as the magnificent buildings in Samarkand, about which Amir Temur truly said that they demonstrated the splendour of the state, the fortress Ark in Bukhara, monumental mausoleums and mosques, ancient baths, as well as the memorial complex of Bahautdin Naqshbandi, named after the head of the legendary Sufi order. However, if Registan Square marvels with its luxury and royalty, and the sights of Bukhara - with calm, moderate grandeur, then in order to present you one more picture that differs from the first two, we should mention Khiva.

The inner city (Ichan-kala) in Khiva is a unique place, which is still imbued with the atmosphere of antiquity. As soon as you enter the gates, be ready to fully immerse yourself in another world, where you can walk along the ancient streets, along the city walls, or the streets between the houses, where sometimes you can see the remains of petrified traces of wagons. You will see carved doors of workshops, simple, but original courtyards, small windows with shutters, domes of mosques and cells of madrassas. You will have the opportunity to walk along the fortress walls, offer a scope of the imagination and for a moment feel what was happening here in ancient times.

Traveling around Uzbekistan, you will hear about people who have forever entered their names in the history of the country. These are outstanding military figures, cultural and scientific figures, heroes of the epic and folk heroes, legends about which local residents will willingly tell you.

And the most important thing is that when you travel from city to city, you will see such a variety of cultures that it seems to you that in one country there are a lot of peoples, so similar to each other, but at the same time, so different, because each of them currently preserves its own unique features.