Since ancient times, there were popular street performers, puppet theaters, playful stories on acute social themes, at the fun for public ridiculed the vices of people.

One of the most popular types of performances were the performances of rope walkers. Sometimes this art involved several generations of one family. Today such tradition lives on. You can see the amazing and breathtaking stunts of rope walkers in the regions of Uzbekistan.

During the XX century there awas a whole galaxy of figures of theatrical, musical, dance, cinematographic arts in Uzbekistan. These outstanding artists made up a whole layer of culture, on the basis of which the next generation of artists grew up. The history has forever remembered the names of a dancer named Tamara Khanum (there is a museum dedicated to her in Tashkent), Galiya Izmaylova, actors Nabi Rakhimov, Shukur Burkhanov, Razzak Hamrayev, Maryam Yakubova and others. The family of Zakirovs, hereditary artists, is widely known. And one of its most worthy representatives - singer Batyr Zakirov - was named the Uzbek Charles Aznavour. 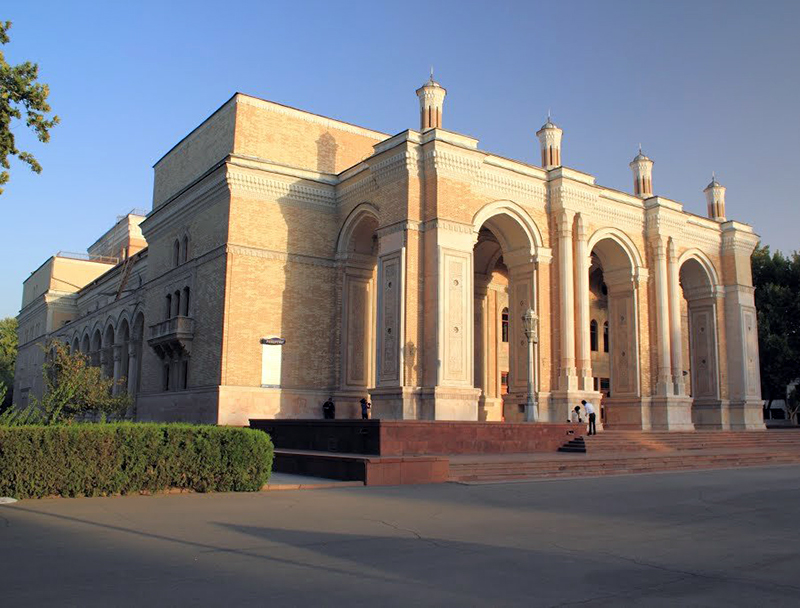 The Uzbek national dances are magnificent with their grace. Creative groups of dancers create an unforgettable spectacle on stage, demonstrating their art.

Theaters are particularly popular in Tahkent.

The theater was founded in the mid-1970's and at first it was opened as an experimental theater studio, engaged in productions of contemporary authors at the time. The main distinctive feature, repeatedly emphasized by the audience, is that "Ilkhom" is a chamber theater, the action here is not so much "in front" of the audience as "among" the audience. Thus, the viewer is directly involved in the cycle of events being played.

The collective of the theater with its repertoire successfully performs year after year in many countries of the world. Also in the building of the theater there are various art exhibitions and festivals.

History of the Bolshoi Theater n.a. A. Navoi originates in 1929 and is associated with the activities of the national dance ensemble and the names of Mukhitdin Kari-Yakubov and Tamara Khanum.

The first play, which brought fame to the theater, was the opera Buran in 1939, directed by Emil Jungvald-Khilkevich. This opera marked a new milestone in the development of the theater, allowing the theater to become a state theater. Since that moment the repertoire of the theater has been steadily developing, winning the hearts of the audience with magnificent performances.

Today, the traditions of the theater continue to live and the productions are also of a high standard, and the repertoire consists of classical works from the treasury of world masterpieces.

However, the price of tickets is very affordable for a wide audience, the minimum price starts at US$3.

Theater, which has almost a century of history, 2018 - the year of the 90th anniversary of the theater. The creation of the theater is a synthesis of the achievements of the national, European and Russian traditions in the theatrical art.

The previous name of the theater, which he wore until 1998 - the Theater of the Young Spectator (Theater for Young Spectators). A significant part of the creative biography of the Youth Theater is associated with staging performances for children and adolescents.

Today the repertoire of the Youth Theater is very diverse, young and talented artists, in their own manner, in modern language, playing modern images perceived by the younger generation, raise acute social and moral problems on the stage. All this, touching the thin strings of the soul of the young spectators, bringing them closer to the heroes, allows them to absorb high categories and eternal values. In this ability to speak the same language as the younger generation and to keep up with the times is the undoubted merit of the Youth Theater.

This theater is also one of the oldest theaters in Uzbekistan. Its distinctive feature is a significant number of productions based on the works of Russian classical literature. The theater is one of the main centers that continues the traditions of preserving and spreading Russian culture in Uzbekistan. Today the repertoire of the theater is considerably expanded and it includes performances of works by Uzbek and foreign writers.