Uzbekistan, although it lives in a modern rhythm, has a great respect for the traditions of centuries-old culture, which is borne by the Uzbek people.

One of the distinctive components of the world view is hospitality, which is the most important feature of the Uzbek national character. In the ancient times in the eastern countries, hospitality was a rule of life and a moral law. And this has always been characteristic of many peoples of the East. Even according to the Yasa (code) of Genghis Khan, the greatest and most unforgivable crime was deception of trusted people and killing of guest. According to the customs of the Arab nomads, a person who touched the host's tent was considered a guest and could be completely calm about his life. 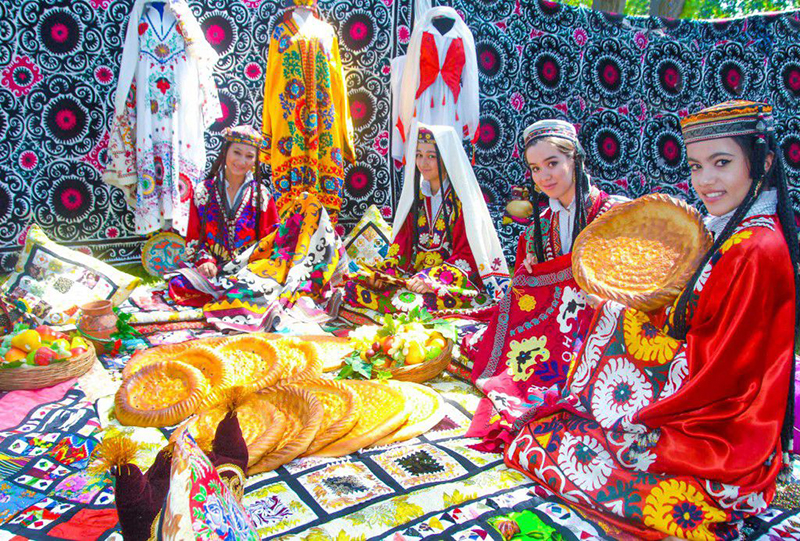 Going on the road, a traveler usually found himself in a "wild field", amidst a hostile nature. But he was consoled and warmed by the hope that in the nearest village, even in a solitary tent, he would be given shelter, fed and heated. Not accepting a guest, not respecting the traditions, meant to dishonor the family, the village, the clan. An unhurried conversation over a table about small and big matters, the health of loved ones, plans for the future with a tea bowl, which is never empty - this is an obligatory initial phase of a guest meeting in Uzbek. The occasion for the meeting can be anything. Guest, and not necessarily Uzbek, can generally appear for no reason, spontaneously. But even then, the warmest welcome awaits him. A joint meal is the main core of such meetings, wherever they occur, and whoever the guests are.

The most important traditions and rites of the Uzbek people are more or less common for all regions, although there are differences in some details between the regions. They are mainly connected with such events as creation of a new family, birth of a child, passing of a person.

These customs are still actual in families with a traditional lifestyle, which in Uzbekistan constitute the majority.

The first thing is a meeting, where young people get acquainted with each other. If they liked each other, then the groom's family sends matchmakers. The Fotikha ceremony will be performed - the groom's older relatives go to the bride's home, an elder breaks two breads (Non Sindirish). From this moment it is believed that the young are engaged. On a certain day, the marriage will be registered in the registry office, after which Nikah happens - a wedding in the mosque or a mullah will be invited to the house. After that the day of the wedding celebration is appointed - Nikoh To’yi. On the eve of the holiday, the bride's family gives the morning pilaf - so a person tells people about a joyful event in his family and treats guests to pilaf. On the pilaf there are only men. After a merry, noisy wedding celebration, the bride is brought to the groom's house and from that moment she enters his family.

The next day after the wedding, "Kelin salom" ("kelin" - bride) ceremony is held - guests are invited to the groom's house, where the daughter-in-law greets guests and opens her face. The young enter into a new - a joint - life.

The birth of a child is always a new stage in the life of a family, because on that day the family sees a continuation of its kind embodied in a tiny creature that just comes into the world. And as nature wakes up in the spring, marking a new cycle, so the child proclaims a new milestone for his family life with his first cry. A child in an Uzbek family is always happy, and an old Uzbek proverb says: "A house with a child is a bazaar, a house without a child is like a mazar (cemetery)."

In honor of the birth of the child, the old rite "Beshik To’yi" is held, during which the bride’s relatives come to her husband's house with gifts for the child to share the joy of a happy event. Beshik to’yi is celebrated either in houses or in restaurants. Traditionally, it is customary to organize an event on a specific day from the child’s birthday (for example, forty days). The rite is symbolic when respected women of the older generation make the first swaddling and put the child in a beshik (wooden cradle). In the interval from 3 to 7 years (not older), the "Sunnat to’yi" rite (circumcision rite) is performed. This day a celebration is held too.

It should be noted that the sacrificial ritual is an integral component in the Uzbek traditions. As a sign of some event, be it a solemn or tragic event, a sacrifice will be made (usually a ram), from its meat pilaf will be cooked. Guests will be invited to come to congratulate the hosts or express their condolences. If financial possibilities do not allow owners to sacrifice a ram, then they can use a cock. The fact that in the family of the neighbors a joyful event has happened is often proclaimed by folk musicians, playing for the whole mahalla (neighbourhood) on national instruments - carnais and surnais.

After the funeral, the gates of the house are open for three days. The relatives are sitting at the gate, dressed in a national robe (chapan), girded with a handkerchief and headdress (duppi - skullcap). Any passerby, doesn’t matter - a neighbor, a relative, an acquaintance or an accidental passerby, can enter the house and as a token of condolence read the surah from the Koran and ask the Almighty to accept the soul of the deceased.

40 days after death and a year after the death, it is customary to perform a sacrifice and give a commemorative pilaf. On this day, national musical instruments are silent.

Today, level of information exchange allows us to communicate almost without effort with different countries, observe the customs of other countries, followed by attempts to adopt something for ourselves, for example, elements of Western culture that have come to Uzbekistan in weddings ceremonies. In this regard, the national traditions, for centuries performed by our ancestors, in many respects have become symbolic. However, they also acquired a different function. Their fulfillment is a tribute to the past and to their traditional culture. And while this happens, the people remain original, preserving their own special features, which means that for a guest, wherever he is, there is always an opportunity to learn something new for himself. The further the process of globalization is going on, the more valuable are the characteristics that underline the identity of a culture. And in this sense, we must admit that Uzbekistan has been very successful in combining modern cultural trends and preserving its own traditions.