In each city there lived a man who with his way of life and actions was setting an example of true devoted service. The man who made his faith an integral part of his own life. It could be either a well-known state or public figure like Alisher Navoi, or simply a worker, an artisan who embodied virtue just with his own everyday life. During his life, or after leaving the world, such person became a saint. The place of his residence and burial, as a rule, became an object of reverence, which preserved the spirit of an amazing man and the memory of him.

Pilgrimage tourism in Uzbekistan occupies a special place, as the appropriate conditions for this were historically formed here. 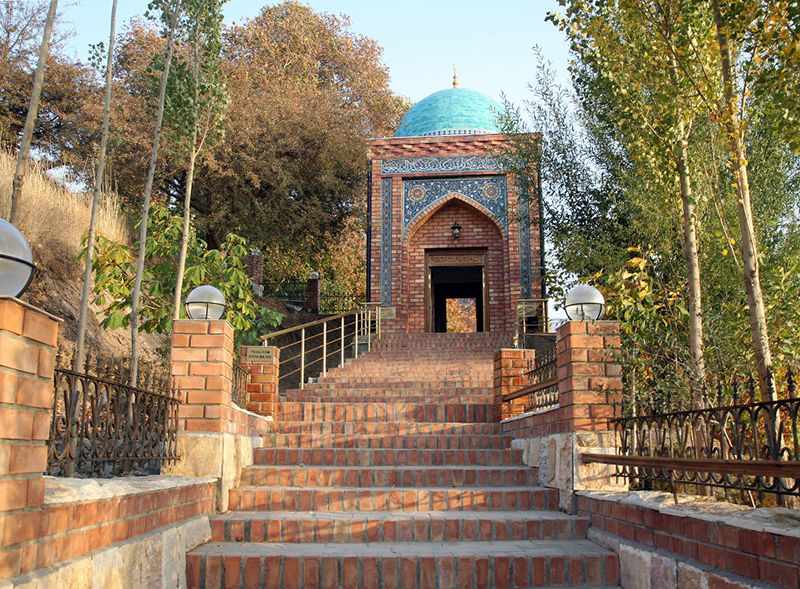 The Khast Imam Complex (Khazrati Imam)  ) is one of the most significant treasures of Tashkent, the religious heart of the capital. It formed near the grave of the great saint, the first imam of Tashkent – Abu Bakr Muhammad Kaffal Shashi. One of the oldest Qurans is located here - the Quran of the third of the righteous caliphs - Osman.

The complex consists of the following structures, each of which has its own history and is associated with these or other people and events:
- Madrasa of Barak Khan;
- The Tilla Sheikh Mosque;
- Madrasa of Caffal-Shashi;
- Museum of the Qurans;
- Juma Mosque of Khoja Ahrar Vali.

Another important place of pilgrimage is the Zangi-ata Mausoleum, a Muslim shrine located near Tashkent. Zangi-ata is a famous preacher of Islam in Central Asia, a major follower of Sheikh Ahmad Yassawi, the founder of the Yasaviyya Order.

Three shrines of Samarkand, visiting of which in one day is equivalent to the making of a small Hajj:
- Memorial complex of Imam Abu Abdullah Muhammad ibn Ismail Al-Bukhari, a legendary theologian, collector of hadith. It was built around the place of his burial in 1997-98 in honor of the 1225th anniversary of his birth;
- Shakhi-Zinda is a whole ensemble of family vaults, storing the remains of representatives of the Samarkand nobility and members of the royal family - the family of Amir Temur. It is located not far from the legendary Afrosiab settlement. It includes a number of mausoleums of the late Middle Ages;
- Mausoleum of Ruhabad, built at the order of Amir Timur, where the remains of Sheikh Burkhaneddin Sagardji are buries. He was deeply respected by Timur, and also was a religious figure at the Chinese court.

Also in Samarkand, you will find the Mausoleum of Khoja Donier (Saint Daniel), the biblical prophet of the Old Testament times, that is praised in three world religions - Judaism, Christianity and Islam.

The sacred Bukhara for a long time was one of the centers of the Muslim religion. Many outstanding religious figures of many countries studied here.

In the suburbs of Bukhara there is the memorial complex of Bahautdin Naqshbandi, the sheikh of the "Naqshbandiya" Sufi order, one of the most famous Sufi brotherhoods.

Moreover, many people know of such a shrine as the Poi-Kalon Ensemble ("The Pedestal of the Great"), which occupies one of the most important places in the religious history of the city. The ensemble consists of Kalyan minaret, Kalyan mosque and Miri-Arab madrasah.

Among other famous shrines are:
- Bolo Haouz mosque;
- Magoki-Attori Mosque;
- Ensemble of Kosh-Madrasa;
- Mausoleum of the Samanid dynasty;
- The mausoleum of Chashma Ayub ("The Springs of Job") is a shrine that is worshiped by both Christians and Muslims;
- Chor Minor ("Four minarets").

Here, in Bukhara, still exists an equally interesting part of the city - the Jewish Quarter. The history of Central Asian Jews is lost in time. They are a special sub ethnos, whose representatives remains very few today. The entrance to the Jewish quarter is located near the Lyabi-Khauz ensemble. The old quarter is divided into three parts: The Old and New Mahalla, and Amirabad. Two synagogues, as well as a Jewish cemetery is situated here.

Long before the coming of the conquering Arabs and the proclamation of Islam, and long before it reached China and Japan, the teachings of Siddhartha Gautama, called the Buddha - "enlightened", found their followers in the ancient city of Tarmit (Termez) at the territory of the ancient state of Bactria. During the archaeological excavations on this and nearby territories, many Buddhist monuments were found. The most famous to this day are: Stupa of Zurmala (or the Tower of Zurmala) is a twelve-meter building, a preserved monument of the Kushan era; and the monasteries of Karatepa ("Black Hill") and Fayaztepa.

These are the whole temple complexes located in the middle of a desert area and are of a special interest both for lovers of history and culture, and for representatives of Buddhism who come to Uzbekistan every year to visit these ancient shrines.