Where if not in museums, we can get knowledge about one or another side of people’s life we are interested in? In this regard, in Uzbekistan there are dozens of museums devoted to various topics. Below are the most famous. 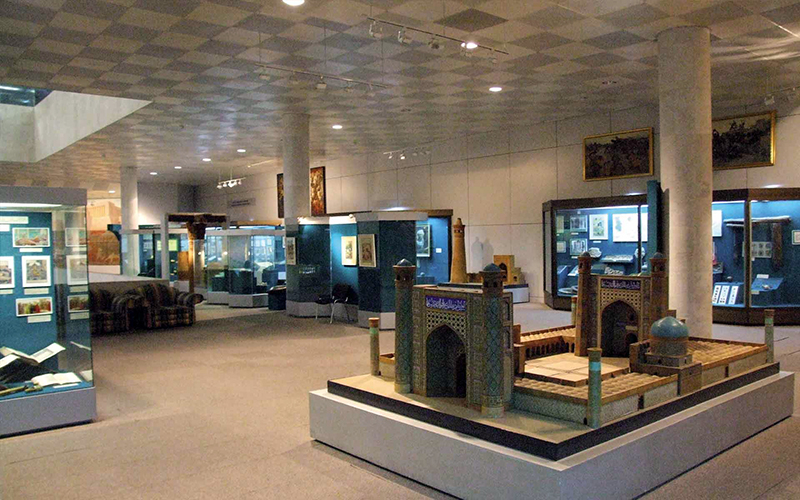 Museum of Arts of Uzbekistan

Founded back in 1918, it represents a unique collection of art works from different directions. The works date back to the 15th-20th centuries.

The museum consists of four departments:

- the Department of Applied Arts of Uzbekistan consists of the goods of handicraft production, left from ancient, medieval civilizations and also new and modern times. Today, carpets, fabrics with original embroideries and utensils amaze visitors with their beauty. This tells us that the inhabitants of ancient civilizations settled on these lands were not far from the feeling of beauty. And you can make sure of this here;

- Department of Arts of East countries. This is a collection of artworks and crafts of India, China, South Korea, also Japan. They reflect the characteristic features of the represented nations life, as well as the features of their aesthetic perception - you will see original examples of beauty, as it was understood by Far Eastern culture creators;

- Department of Art of Russia and countries of Western Europe. Here you will see samples of the icon painting art, the work of unsurpassed Russian painting masters, as well as the work of famous Western European artists of the 15th-19th centuries. Also, you can see sculptures of European masters made in antique style.

- Department of Fine Arts of Uzbekistan. Here the largest collection of the museum is presented, showing the way of development of Uzbekistan’s national painting in all its origin. That means decades of formation and development, search and mastering of one's own path in art - the path that took form in the fusion of the classical school and the trends of a specific era when a master used to work in.

Museum of History of Uzbekistan and Museum of Timurid’s History

One of the oldest museums in all of Central Asia. Hundreds of rare exhibits will show you the birth, development, decline and change of civilizations, from the 5th century BC. through the Middle Ages and to our days. We also recommend visiting the Timurids History Museum, which will tell you about the great era in the history of the country - the era of its highest power, the medieval empire of Amir Timur and his descendants.

Features of folk culture are always associated with the peculiarities of the geography and life of people. And the heritage of folk culture is always reflected in the subjects that are used to solve pressing practical problems. To some extent, objects are similar to all peoples who share a similar lifestyle. But the distinctive feature is the use of the aesthetic component - a sense of beauty that is characteristic of a person. It manifests itself in different forms among different peoples. For centuries, accumulating and transmitting wealth forms as a result a treasure trove and that becomes a heritage. It is this heritage that distinguishes the Uzbek people, is represented in the Museum of Applied Arts. Products decorating the interior are carpets, fabrics, mural paintings, painted dishes, wood carvings, complex patterns, elegant furniture and other exhibits. Here you will see the highest forms of beauty in the best Uzbek traditions.

Opened in 1989 in connection with the centennial of the Central Asian Railway, this museum is a unique place. During tours you can get familiarize with the history of railway equipment development, the arrangement of locomotives, diesel locomotives, electric locomotives and other products of the past railway industry.

Some of the exhibits can now be seen only in the films about the Civil War. Here you have the opportunity to witness and imagine the might of the once roaring iron giants, that became today part of a great history.

Afrasiab is an ancient settlement, the legend of which represents the ancient history of Samarkand. One can even say that the legends about Afrasiab and the hero of the ancient epic Siyavush are the main legends of this famous city. The name of the museum is not accidental, since it is located near the place where the legendary Afrasiab was located. Its existence dates back to the distant times of Sogdiana's existence, when the original culture of the Central Asian peoples had not yet been affected by the influence of those who came in the 7th century. Those were Arab conquerors who brought a new religion in place of the Zoroastrian, a new architecture, a new worldview. Therefore, Afrasiab is the portal to Samarkand’s foundation.

The citadel, called "Ark" is the most ancient building of Bukhara today. Once serving as the residence of local rulers, collapsing and being rebuilt again, it has survived to the present day and now serves as a unique museum of its kind attracting thousands of tourists. The museum is represented by the following departments: the historical department, the numismatics and epigraphy department, the nature department of the Bukhara oasis, and also the department of literary written exhibits.

Making toys is a special craft, because national toys are a miniature reproduction of the world. This craft, like any other, has its own centuries-old history, its traditions. On the traditions of the Bukhara school, on the history of crafts, about toy predecessors of distant times, you have the opportunity to learn in the Museum of Puppets near the famous ensemble Lyabi-Khovuz. Here you will see magnificent, bright, colorful and funny collections of puppets that embody different colorful types used in puppet shows. The whole depth of this, at first glance, unpretentious craft appears before you, revealing your essence and telling you what you may not have thought of.

The architectural structure, which began its history in the second half of the XIX – was finally built in the early XX century. During this time, it was repeatedly destroyed and rebuilt again. Before the capture of Bukhara parts by the Red Army and the abolition of the Bukhara Emirate, the palace was used as a suburban residence of the emir of Bukhara. These days it serves as a museum of decorative and applied art. Actually, the museum exhibits are associated with the local lifestyle of Bukhara at the end of the XIX - first quarter of the 20th century, preserving the situation of that time, the setting of a luxurious palace with an appropriate interior. At different times during the twentieth century, the building of the museum was used in accordance with different subjects, and the names of departments were changed. Today, the museum consists of rooms, which represent the interior of the palace, as well as the houses of urban residents.

Khorezm is one of the oldest kingdoms on the territory of Central Asia. It was an independent state, with its borders, much later, transformed into Khiva Khanate. Now the territory of the Khorezm region is on the border with Turkmenistan, and the once prosperous Turkmen city of Merv (Mary), destroyed by Genghis Khan, and never recovered, was part of Khorezm. Therefore, in the language, in the external cultural appearance of the Khorezm people, one can see similar traits with the Turkmen. The famous hero of these lands is Turkmen by origin, Prince Jalal-ad-Din Manguberdy, the commandant of the fortress Khojent.

Today, the fortress-museum of Ichan-kala (Khiva) silently speaks to us of the Khiva Khanate's times - an inner city surrounded by fortress walls and gates facing four sides of the world. This unique city-memorial was given the rank of the world heritage. Despite the old days, life is still boiling in it - workshops, shops, hotels, canteens, mosques and much more - and this makes the inner city even more interesting. Probably the main advantage of Ichan-kala, as one big open-air museum, is a living image of the Central Asian city of the XIX century. You do not look at the photograph of the old city in the encyclopedia, you personally live in the ancient city. Houses of the old model, palaces, madrassas, mosques, minarets and mausoleums - an entire irrevocably left epoch fits within the walls of the inner city.

On the expanses of Uzbekistan there is a land called Karakalpakia with its capital in Nukus city. Here in 1966, a unique museum was opened, where a shelter was found for a large number of works of Russian artists, representatives of the avant-garde. I.V. Savitsky was an artist, an ethnographer, collector of works of art, a teacher, an ardent adherent of his work. Versatile development, irrepressible energy and love Savitsky, nicknamed "the Central Asian Tretyakov", gave to his craft allowed him to create one of the best collections in the whole world in a distant little-known region. The saved works of avant-garde artists, works of applied art of local artists, his personal works and many other things are presented here, more than 90 000 exhibits in total. It is a unique collection of one of the last preachers of Russian art in Central Asia.