One of the main features of Uzbekistan is its multinationality. From ancient times, cultural and intellectual exchanges took place between different nations, as large cities were also centers of culture, science and commerce during their heyday. In a natural way, settled culture creates space that opens up numerous opportunities for an enterprising person. Constant contacts, carried out on the trade, diplomatic, labor, intellectual spaces, brought new colors to the local culture. It was not without contact, established as a result of wars, when thousands of people were forced to leave their native lands and find a second home here.

An example of contacts at the trade level is the Great Silk Road, which attracted traders from all over the world. Dynasties were replaced, and caravans continued to go from afar, carrying out continuous communication between people of different countries. 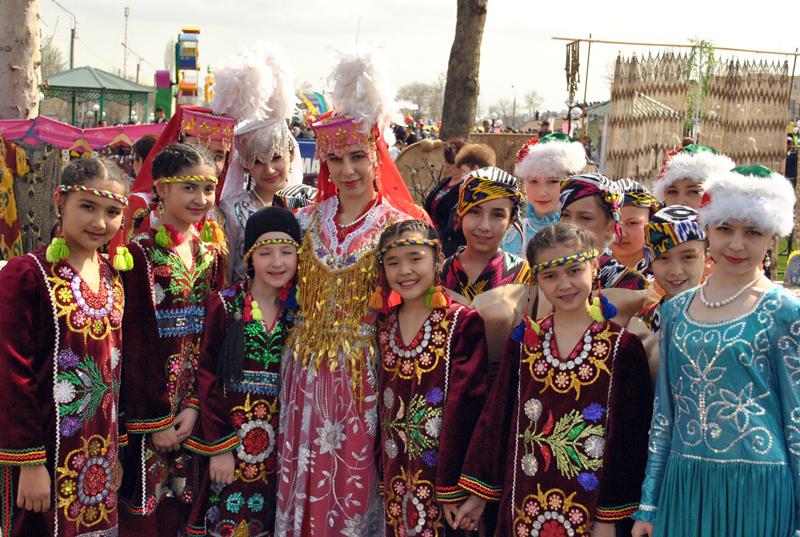 Intensive intellectual exchange occured during the reign of Caliph Al-Mamun, who patronized the development of science. This period was called the era of the Eastern Renaissance, when the works of ancient philosopher scientists were not only preserved, but creatively finalized by outstanding scientists and encyclopedists of the medieval East. Thus, the ancient idea, which represents the origins of Western science, merged into the Arabic-speaking Muslim culture, and was further developed.

Famous military commander and politician Amir Timur brought artisans and masters of various arts from conquered lands. The skill of some of them is permanently imprinted in the architectural structures that have survived to this day.

During the Russian Empire era, many people from other parts of the empire came to the Uzbek lands and stayed. Opportunities to conduct business in the Central Asian market attracted entrepreneurs. Trade, business were developed, shops were opened. With the growth of diasporas, an intellectual stratum appeared, specialized schools were opened.

Today on the territory of Uzbekistan, besides Uzbeks, live the following nationalities: Russians, Kazakhs, Karakalpaks, Tatars, Kyrgyz, Iranians, Tajiks, Turkmens, Jews and many other.

It is worth mentioning the destinies of some peoples in particular, because through these examples the distinctive feature of the eastern culture - hospitality - was manifested. These are examples of the tragic fate of peoples who were not left in trouble.

The Kazakhs. Contacts between the nomadic and sedentary populations of central Asia never ceased. However, in the XVIII century during the Dzungar conquest of Kazakh territories, part of the Kazakhs had to resettle to the lands that later - in the XX - were included in the Uzbek SSR.

Ethnic Koreans were deported from the Far Eastern Territory of the USSR to the territory of the Uzbek SSR in 1937. Today, the Korean diaspora is one of the most numerous in Uzbekistan.

The Tatars. The history of the appearance of Tatars in the territory of Central Asia goes back to the distant times of Maverannahr. Descendants of the ancient tribe of the Tatars, displaced by intertribal wars from the territories of the Great Desert, found a house in the open spaces of Central Asia.

For centuries, trade relations with the Central Asian khanates continued, in which merchants of Tatar origin took an active part.

Many Tatars go to Uzbekistan in the XVIII - XIX centuries, looking for education, as it is known that the educational institutions (madrassas) of the Bukhara  city were famous in the Muslim world.

Tatars also played an important role in cultural and educational activities, were active participants in the movement of the Jadids.

The Russians. The appearance of the Russian-speaking part of the population dates back to the mid-19th century - the time of conquest of Central Asia by Tsarist Russia. Historically, Central Asia has become a field of conflict between the economic and political interests of the British and Russian empires. As a result of the conquest, the Turkestan Governor General was created, the region became a protectorate of Russia. Since that moment the history of Central Asia has become part of the history of the Russian state right up to the collapse of the Soviet Union in 1991.

During all this time, the Russian part of the population, especially in the Soviet period after the Great Patriotic War and throughout the second half of the 20th century, accounted for a considerable percentage of the total population of Uzbekistan. After 1991, part of the Russian population moved to their historical homeland. However, despite that the influence of Russian culture on the culture of Uzbekistan is still felt. Russian is the second language in terms of the number of speakers after Uzbek language. Branches of state Russian universities were opened in Uzbekistan, as well as the Russian cultural center and the Russian center of science and culture.

The Greeks. The influence of the Greek culture to the Central Asia was felt even during the campaigns of Alexander the Great. Much later, a large number of Greeks fled to Uzbekistan as a result of forced mass resettlement in the 1940-s (two waves of resettlement from Russian cities, as well as the settlement in Uzbekistan of political immigrants from Greece). As a result, the so-called "Greek towns" appeared, where conditions for living and working were created. Later a Greek newspaper was launched, and Greek classes were opened in schools.

Iranians have long had contacts with Central Asia, since it was a part of the Persian state for a long time. Later there were both voluntary single migrations of craftsmen, traders, and resettlement as a result of aggressive campaigns, as it was in the days of Amir Timur. It must be said that the language of settled Uzbeks, unlike the language of nomadic (Kypchak group), experienced a considerable influence of the Persian language. Today dialects of a related to the Iranian Tajik language can be heard mainly in Samarkand and Bukhara.

Central Asian Jews. According to one version, they were settled in Central Asia even during the reign of the Persian Empire. Under Amir Timur, many of the Jewish artisans were brought here. During the Soviet period, the Jewish diaspora numbered a considerable number of people who successfully manifested themselves in many spheres - science, art, and technology.

During the Great Patriotic War, representatives of many peoples were evacuated to Uzbekistan, where they found their second home. Many of them stayed here after the war. Having preserved their traditions, all these peoples enriched Uzbekistan, making it a multicultural country.

Today, an indisputable sign of the solidarity of cultures and nationalities is a large number of cultural centers, where the characteristics of the most diverse peoples are represented. For several years now they have been active in the field of education, preserving and development of their own culture. They carry out a large number of cultural events. We can say that they are a kind of nucleus, the focus of the country's cultural potential and cultural wealth. You always have the opportunity to attend events and see the representatives of local diasporas, hear their language, music, learn about the peculiarities of clothing, about the different arts of their people, learn the unique cuisine and so on.

But what is still important, and in some sense more important is to feel, beyond external cultural differences, a striking commonality rooted in the depths of centuries. The commonality engendered by a common destiny.