The Jami Mosque in Kokand on Chorsu Square is the main Friday mosque of the city. It was built in the 19th century on the site of an ancient mosque destroyed during the Mongol conquests, which was erected here in the 9th century. 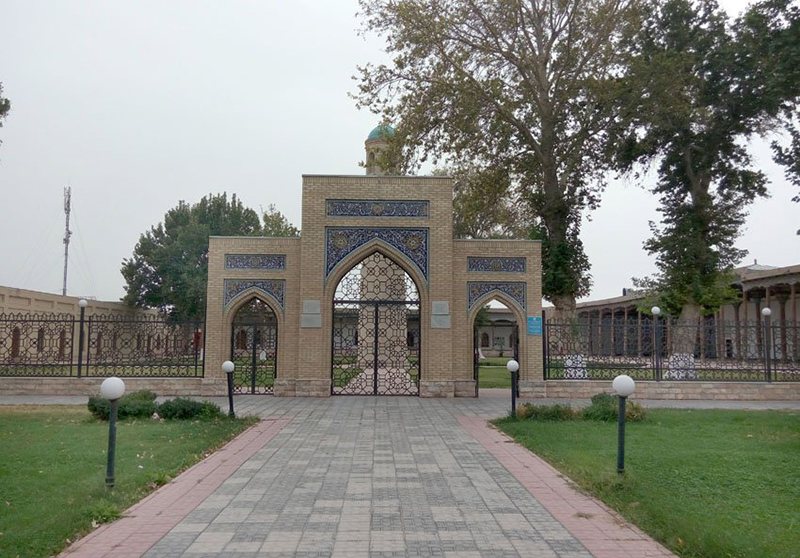 Aivan was located from the western side of the courtyard, a khanaka with a painted ceiling for prayers in winter time was built on the territory of the mosque, and there were training rooms and living rooms for students of madrassahs (hujras) on the periphery, which operated until 1918. The 22 meters high minaret stands in the middle of the courtyard of the complex, which served to call the faithful to prayer, and according to some legends, criminals and unfaithful wives were thrown down from it. The minaret was built later during the rule of Khudoyar Khan in 1852. And in 1857 Khudayar Khan ordered the restoration of the mosque.

Aivan, located on the territory of the complex, stands on 98 columns painted with golden colors carved from the karagach tree. In turn, the columns stand on marble slabs, brought from India as a gift to the ruler. And its colorful painted ceilings testify to the high level of development of art and architecture of Kokand.

The facade of the mosque stretches for 100 meters, and it faces east. The interior of the mosque impresses us with the carved and colored garnish ornament of the walls in the form of geometric and floral patterns.

The minaret is laid out of a smooth burnt brick and is decorated with a blue dome, under which six arched windows are opened. A spiral staircase leads to the top of the minaret.

In 1905 the mosque was restored by the local merchant Mir Habib Bay, who summoned the masters from all over the Fergana Valley.

With the power of the councils, the madrassas were dismantled into bricks, and the mosque was closed during the brickwork of the main facade.

In 1982, thorough more work was carried out to restore this religious and cultural complex. The cathedral mosque operates today, and its main role, as the main monument of Islamic culture, will never dry out.

Tours that include Jami Madrasah and Mosque in Kokand