The palace of Tash-Khauli ("Stone Yard") is the main palace of the rulers of Khiva. It is truly considered a masterpiece of Khorezm architecture. It was built by the order of Allakuli Khan in 1830-1838. The period of the reign of Allakuli Khan is one of the periods of the prosperity of the Khiva Khanate. An upsurge in the economic, political and cultural life of Khorezm was observed namely during the period of Allakuli Khan government. The successes of foreign policy and trade with the Russian Empire during this period greatly enriched the region.

The palace of Tash-Khauli was a reflection not only of greatness, but of the unique style of Khorezm masters. Its construction was carried out not without tragic events, since not one master was put to death while working on it. It is explained by the fact that Allakuli Khan demanded to build a palace in two years and the masters, who understood that it is impossible to fulfill the demands of the khan in such a short time, refused for which they were put to death. Anyway, the palace was completed within eight years due to the efforts of the skillful masters Tajdiddin and Kalandar. 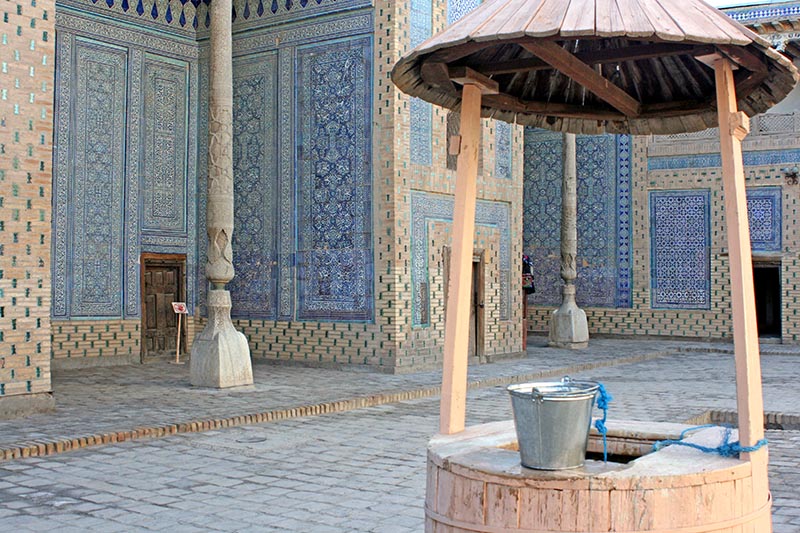 It is important to note that Tash-Khauli currently remains almost original, as it has been not restored (with rare exceptions). Stunning unique patterns of the master Abdullah, known in the people as "Genius", amaze the eyes. The palace includes over one and a half hundred rooms, in particular, here were the chambers of the harem occupying a good half of the palace, the reception room, and also the court room.

Inside the palace there is another small attraction - a coach of a Russian stove-maker who came to build a fireplace for the khan. According to the legend, the wives of the khan were so fond of an outlandish wagon that the stove-maker who came from Russia left it as a gift to the harem.

Tours that include Tash-Khauli Palace

The Heart of Central Asia. Tour to Uzbekistan from Moscow (Economy)
8 days / 7 nights
from $340
More tours