Burial places of Saints occupy a special place among sights. Unlike the tombs of great rulers, distinguished by splendor, luxurious decoration, mausoleums of Saints can present greatness with their simplicity, embodying humbleness, inner strength, purity and ascetic spirit of great avliyo ("saints").

Mausoleum of Said Allauddin can be considered such place by right. The burial place of Sufi Sheikh Said Allauddin, one of the prominent representatives of the Sufi Naqshbandi tarikat (order) is one of the oldest architectural monuments of Khiva. The beginning of construction, according to the sources, dates back to the second half of the 14th century, that is, the time when the capital of Khorezm was once thriving Gurganj (Kunya-Urgench). 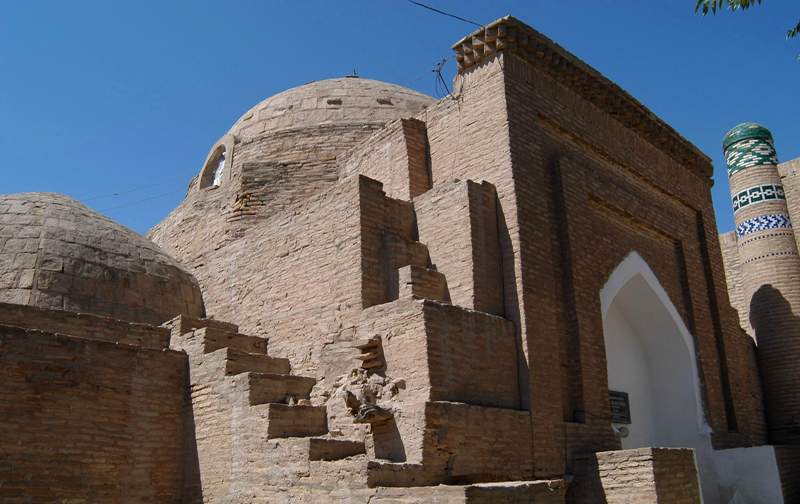 According to the legend, when Said Allauddin was a teacher at school at the mosque, Pahlavan Mahmud, the future undefeated wrestler who was also destined to become a Saint, was among his students.

After the death of Sheikh, another his disciple - Amir Kulyal, wishing to perpetuate the memory of his teacher, built the mausoleum.

As mentioned above, the appearance of the mausoleum is an inconspicuous ancient structure; you will see no decorating details on it. On the contrary, the appearance of the mausoleum is extremely modest.  Such restraint in appearance truly symbolizes the spirit of ascetic life, which great spiritual practical men of the past had. However, here we get inside and we see amazing kinds of interwoven vegetable patterns and ornaments, affecting by their accuracy and symmetry, beautiful color combinations. The impression, that the whole complex produces, is as a great symbol of the Saint’s image: as humble outside, as rich inside.

Tours that include Said Allauddin Mausoleum