Turquoise glaze, technique of which is known only to the narrow circles of craftsmen, covers the towering dome in the middle of the city. Pahlavan Mahmud was buried beneath it, a saint, patronizing his hometown and fighters-combatants.

During his life, Pakhlavan Mahmud gained fame as a brave, strong, capable, virtuous man and subtle thinker. Through the example of his life and deeds he asserted the principle of comprehensive self-improvement, following the path of peaceful warriors-workers, folk heroes ("pahlavan"-  a warrior). 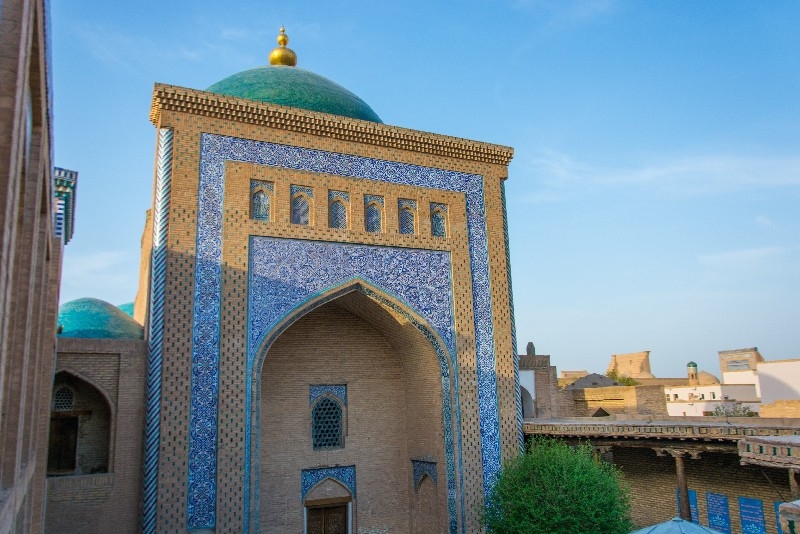 Description of his life is an example of embodiment of human central task - to follow ways to achieve perfection in thoughts, deeds, faith. According to the stories of Khiva people, he had furriery craft, wrote poems and philosophical treatises, participated in public life, also made name as an unequaled wrestler, and never got knocked down. There is a legend that only once Pakhlavan Mahmud was defeated, when he learned that his competitor’s life was at stake, he saved his life. Another legend says that, using not only his strength, but also wit, Mahmud liberated from the shackles of slavery many of his compatriots. They also say that he had the ability of a healer.

After the death Pahlavan Mahmud was sanctified by mosque in the rank of a Saint. He occupies a special place in the history of Khorezm. Courtyard in the workshop, in which he labored, became the burial place of the legendary hero and soon turned into an object of pilgrimage. In 1701, the mausoleum was built, subsequently growing up to a complex; around the tomb of the Saint there are tombs of several rulers of Khorezm and members of Khan's family.

The mausoleum inside is an indescribable sight. Unimaginable beauty of decoration boggles with so many subtle details that sometimes it is difficult to imagine that people even with all their artisanship are able to create something like that. However, time after time, the true masters and saints prove us the contrary by their deeds.

Atmosphere, filling the holy place, is unique. Probably, each of us in moments of solitude, occasionally being distracted from the daily bustle, sets eternal questions about sense, destiny, something higher. Visit this place and, maybe, particle of wisdom of the great man will open to you.

Tours that include Pahlavan Mahmud Mausoleum