Sherdor Madrasah is a well-known educational institution on the Registan Square; it is the "mirror image" of Ulugbek madrasah which stands across from it. The madrasah was built under the decree of Yalangtush Bakhadur, a ruler of Samarkand, in 1619, 200 years after the construction of its "twin brother". The madrasah was built by the experienced architect Abdul Jabbar on the site of the former Sufi monastery built by Ulugbek. Despite the skill of the architect, the building is slightly lower than its mirror brother, but this did not make it less elegant. The name "Sherdor" was given to the madrasah in honor of the drawing of a lion carrying a radiant sun. The same image then appeared on a 200-sum Uzbek cash banknote, having become a true national symbol. 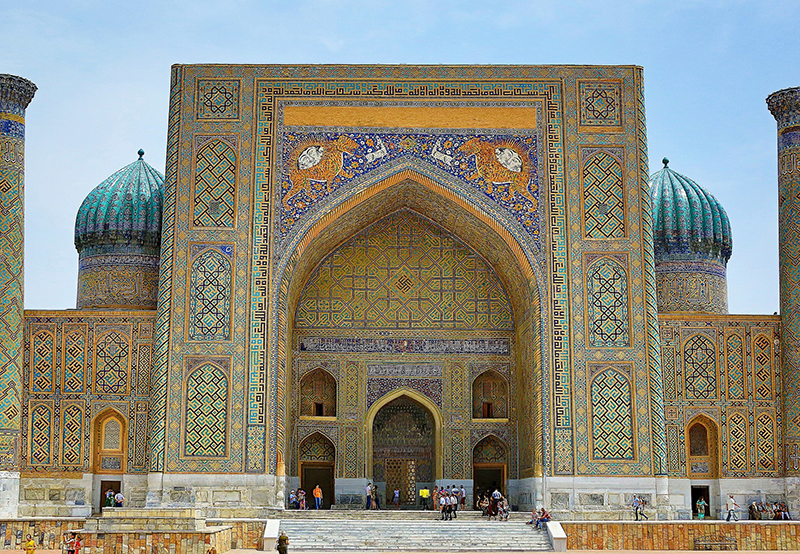 Like the Ulugbek madrasah, the "lair of lions" consisted of hujras, rooms for students, though because of their enormous sizes, there were only 50 of them. The students studied geometry, mathematics, human life studies, theology and other disciplines. The madrasah was built in oriental style with the use of mosaic, figured ornaments and carvings, that is all inherent in Muslim architecture. High minarets rise to the sky, openwork patterns richly adorn the arches of cells, and the many-sided blue dome is iridescent in the sunlight.

During its long life, the university suffered a lot of earthquakes and devastations. It was repaired several times by modern architects. They could recreate the old, ancient appearance just the same as it was hundreds of years ago.

Tours that include Sherdor Madrasah