Gur Emir Mausoleum is a family burial of the great commander and conqueror Amir Temur, his sons, grandchildren and close tutors. A madrassah was erected in the ancient city of Samarkand in 1404 by Mukhammad Sultan, grandson of Amir Temur, and its purpose was scientific and cultural education. However, after the death of his beloved grandson, the great ruler Tamerlan ordered to build a mausoleum next to the madrasah. The mausoleum has a painted decorative portal entrance and includes the madrassah of the deceased grandson of Muhammad Sultan, two high minarets and a single-domed octagonal structure, where the tomb of the famous ruler is placed today.

The large blue dome is decorated from the inside with gilding and lots of ornaments, and under the light of a massive chandelier it looks like the sky strewn with stars. The stone tombs of Amir Temur, his grandsons Ulugbek and Mukhammad Sultan, his sons Miranshakh and Shakhrukh, as well as his spiritual mentor Mir Said Baraka has been under it over 6 centuries. The tombstone of Amir Temur, made of dark green jade, is in the very center. The graves are located just below, under the decorative tombstones, under the mausoleum. 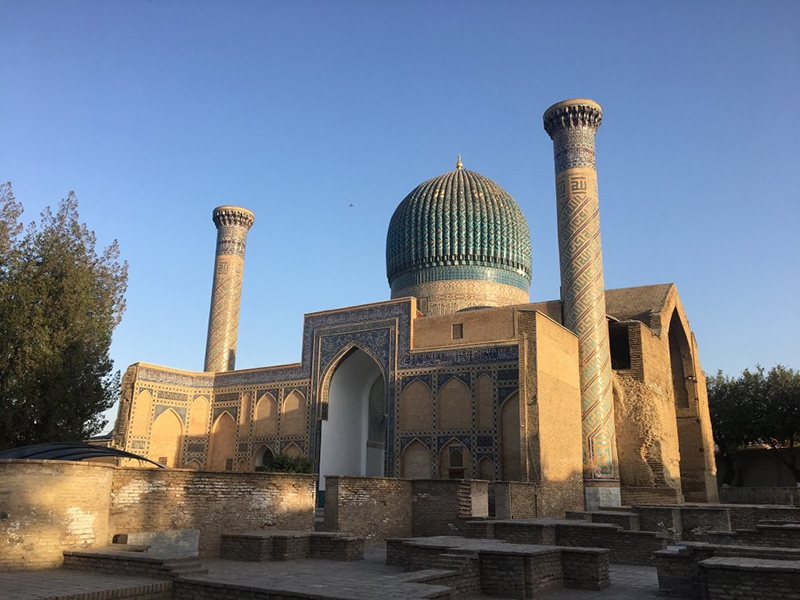 In 1941, Soviet scientists excavated and opened the crypts in the mausoleum. The research shown that Timur, Ulugbek, Miranshakh, Shakhrukh, Mukhammad-Sultan and Said Baraka are actually buried in the vaults. It was confirmed that Amir Temur was very tall for those times (almost 170 cm) and limped when walking. The epitaph on his tombstone says: "Anyone who disturbs my peace will suffer and die." The scientists did not pay much attention to this. The day after the opening of the crypts, the Great Patriotic War, the bloodiest and terrible war, started and took lives of millions of people. Is it a coincidence or curse of the great commander Temur, the "God of War"? Since then, no one has disturbed their peace. People only come to admire the beautiful burials of the great people, the historical architecture and the interior of the mausoleum and to pay tribute to the memory of our great past.

Tours that include Gur Emir - Burial Vault of Timurids

Excursions that include Gur Emir - Burial Vault of Timurids