Tilla-Kari Madrasah is the last of the three buildings of the world-famous complex of Registan Square, that was erected by a ruler of Samarkand. It was built in 1646 and, according to the plan of Yalangtush Bakhadur, it should have combined a spiritual institution and a mosque. The madrasah had been in construction for 14 years, the ruler died not even having seen his creation.

"Madrasah of gold" is the literal translation of "Tilla-Kari." It was given this name because the facades of the madrasah and the mosques are covered with gilding made in the unusual technique called "kundal". The peculiarities of the technique lie in the relief painting which was then covered with gold. As scientists believe, this kind of technique was the result of the desire of masters to imitate expensive brocade, silk fabric woven with precious golden and silver threads. The "kundal" technique perfectly showed how light and shadow play: the light entering the rooms through windows and grills, reflected on the gilded ornament and made them sparkle. The whole room was shining and sparkling with golden sequins. Such decor makes the madrasah unique, different from the others. Tilla-Kari madrasah is made under the influence of traditions of Bukhara architecture, which means that it differs in proportions from its neighbors. Despite its short height, it perfectly distinguishes the power and strength of the other madrasahs nearby, emphasizing their greatness. 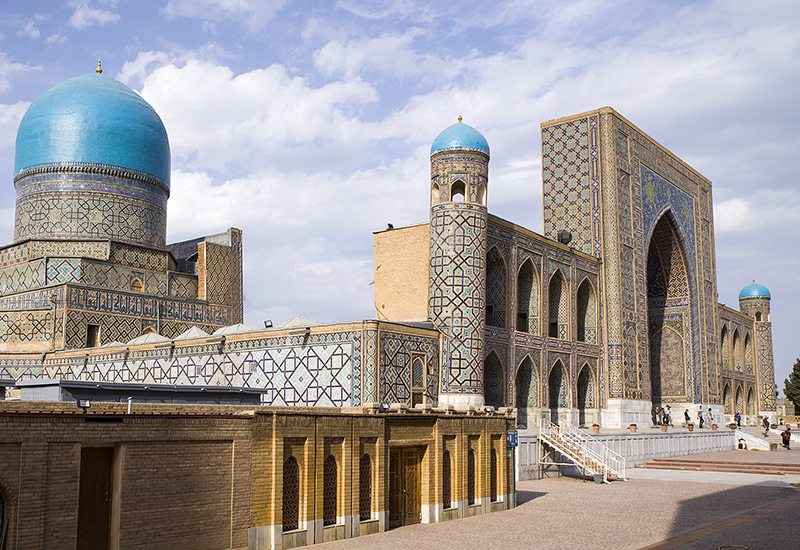 In the XIX century, the ecclesiastical educational institution was destroyed by a strong earthquake, the tiled facing and the famous gilding completely disappeared. After the restoration, the ancient madrassah got back to its original appearance with its decor and ornament. In 2001, this religious building was put on the UNESCO World Heritage List.

Tours that include Tilla-Kari Madrasah