Shakhi Zinda is one of the most impressive memorial complexes of Islamic architecture of the XIV-XV centuries. The complex is a huge burial place for noblemen of the Temurids' times. It consists of beautiful mausoleums with blue sky-like domes, mosques with painted majolica and other skillful structures with a total area of 200x40 meters. The ensemble of the mausoleums was named after the cousin of the Prophet Muhammad, Kusam ibn Abbas, who was called Shakhi Zinda, which translates as "The Living King" from Persian.

The legend says that Kusam ibn Abbas arrived in Samarkand for preaching of Islam, but he was killed by an arrow in one of the unbelievers' attacks. He didn't die, he hid in a cave, where he still lives. Thousands of believers come to the sacred place of Kusam ibn Abbas's burial, as the pilgrimage to his burial is considered by some similar to the hajj to Mecca. 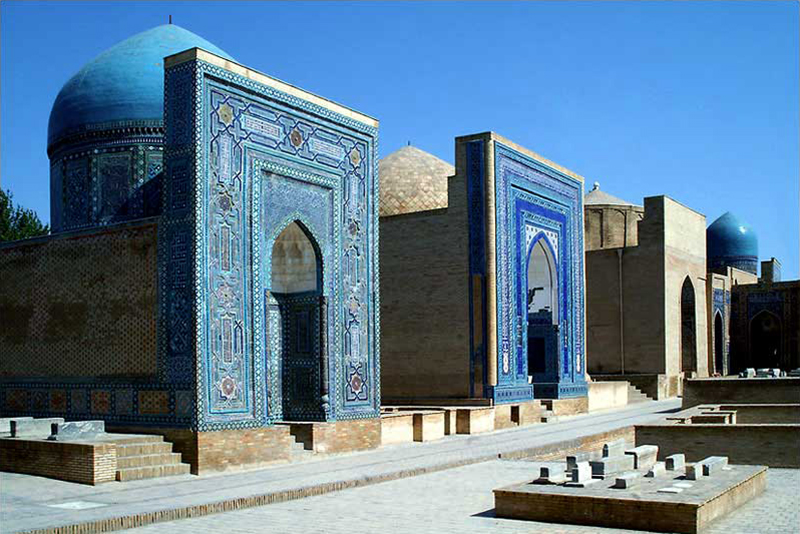 There are mausoleums of 10 people in Shakhi Zinda:

Kusam ibn Abbas - the first and the main mausoleum

Khoja-Akhmad - only the portal survived to this day

Tuglu-Tekin - the daughter of Emir Khoja

Shady-Mulk-aka - the mausoleum of Timur's niece

Mausoleum of a noble lady - a girl that died sinless

To get to the first and the main mausoleum of Kusam ibn Abbas, pilgrims had to perform a sacred 40-day ritual, climbing only one step every day. The climbing was accompanied by reading prayers from the Quran, appealing to Allah and pondering their actions. It was believed that after 40 days a person is clean, follows the right path and only now can rise to the sacred burial. In our days, one can see dozens of tourists and ordinary people, who climb and descend the stairs many times. They do it because they believe that if you count exactly 40 steps when climbing and descending, then you have a pure soul and pure thoughts.

Shakhi Zinda architectural ensemble amazes with an abundance of various paints, ornaments, patterns, carving techniques, proving the skill of hundreds of craftsmen who worked on this beauty. It is impossible to imagine how many hands and minds have created this sacred place of artistic, historical and cultural value of the whole Central Asia, which has survived to our days, so that we, the descendants, could honor the memory of our ancestors, know and remember their achievements, respect the history of our nation.

Tours that include Shah-i-Zinda Necropolis

Excursions that include Shah-i-Zinda Necropolis