Samarkand is the "pearl of the east", one of the oldest and most beautiful cities in Uzbekistan. The city was founded far in VIII century BC and was the main point at the crossroads of the Great Silk Road. For many centuries, Samarkand has been the center of science and art and it found reflection in the world-famous ancient sites. Almost all cultural property of Central Asia is concentrated in Samarkand, which today is a great world heritage and is protected by UNESCO.

A little bit of geography: the city with the area of 120 km² extends along Zarafshan River and is surrounded by Pamir-Alai Mountains. Samarkand is located at the altitude of 702 meters above sea level, and as of January 1, 2018 the population, according to statistics, amounted to more than 500 thousand people.

A little bit of history: Samarkand was called differently in various sources: "Marokand", "Shakhristan", "Afrosiab" – as the hill with the same name, on which it was erected. The city was repeatedly attacked. In 329 BC the present territory of Samarkand was conquered by the army of Alexander the Great. In 712 AD Arab invaders led by Kuteiba ibn Muslim invaded the city where they began to preach Islam. In 1220, the city was gained by Genghis Khan, the founder of the Mongol Empire. As a result of all military events, Samarkand was badly ruined and required urgent restoration.

The great commander Amir Temur was able to rebuild and create a beautiful and unique city. In 1370 he was elected as a governor of Maverannahr and from that moment Samarkand became the capital, the cultural and scientific center. Amir Temur's contribution to the history of Central Asia cannot be overemphasized: agriculture and trade developed noticeably during his reign, economic growth was ensured, and the XIV-XV centuries went down in history as the "golden age" for the development of science, literature, art and spirituality.

How to get to Samarkand

You can get to Samarkand both by air and by land. There is an international airport "Samarkand" connected by air ways with the largest airports in Russia and Kazakhstan. For example, there are direct flights from Moscow to Samarkand from Vnukovo, Domodedovo and Sheremetyevo airports operated by Uzbekistan Airways (twice a week), Aeroflot (once a week) and Utair (3 times a week). From Pulkovo airport in St. Petersburg you can take a flight to Samarkand, operated by "Uzbekistan Airways" and "Aeroflot", on Wednesdays and Fridays with a transfer in Moscow. The distance between Moscow and Samarkand is about 2800 km, the average flight time is not more than 4 hours; between St. Petersburg and Samarkand the distance is about 3400 km, the average flight time is 4.5 hours. "Aeroflot" and "Air Astana" airlines offer direct flights to Samarkand from the cities of Kazakhstan (Alma-Ata, Astana, Atyrau, Shymkent, etc.). You can get to Samarkand by land transport. From Russia you can also take trains Moscow-Tashkent-Samarkand, or from Chelyabinsk, Ufa, Samara, Yekaterinburg, Saratov, Volgograd and other cities to Tashkent, and then from Tashkent take "Afrosiab" high-speed train (departing from Tashkent daily, 3 times in a day). From Kazakhstan, there is a train on the route "Nurly zhol-Astana-Samarkand" once a week.

Upon arrival in Tashkent, you can get to Samarkand by taxi too. If you want to save on travel, you can try to find a couple of travel companions. So, the trip will cost less.

The climate in Samarkand is dry and subtropical, winter is cold, summer is very hot. The average temperature in summer is approximately 35-40 degrees. Therefore, the best time to walk through the ancient city is the early autumn or spring, when there is no rain, the air smells of greens and a cool breeze wafts. If you decide to visit this city in the summer, a hat or other headdress is a must have accessory, and also do not forget about water, since summer is very dry there.

What to see in Samarkand

People come to the ancient Samarkand to admire the ancient sights that is plenty of here: the beautiful Registan Square - the very center of the city, Tillya-Kari, Sherdor and Ulugbek madrassahs, Afrosiab ancient settlement and museum, Gur-Emir, Bibi-Khanum, Ruhabad, Shahi-Zinda mausoleums, Ulugbek Observatory and this is only a small list of the places every tourist should definitely visit.

For those who are not indifferent to art, there are several theaters where you can watch performances and have a good time. Among them is a especially popular among tourists Samarkand historical costume theater called "El-Merosi" enjoys, which translates as "national heritage". Every Sunday at 4 pm there is a spectacular show of national costumes of different epochs and times. Under the fiery dances of "lyazgi" the best dresses of Khorezm are shown. Scenes of a reception of ambassadors from foreign countries in the ancient times and even a real Uzbek wedding are staged! Chic dresses of kings and their courtiers, unique music and national dances do not leave any tourist indifferent. This place is a real casket of true oriental culture. After a live performance, you can go to the cinema to watch national or modern cinema, and in the end to stroll through the evening city. At night it is especially beautiful.

Tours that include Samarkand 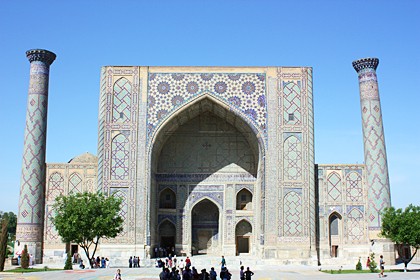 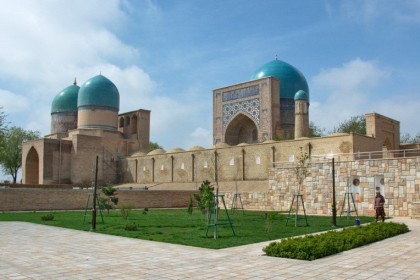 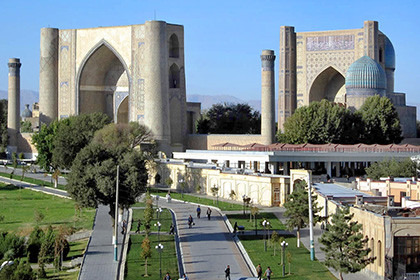 What to do in Samarkand

Despite the abundance of ancient places in the city and the relevant atmosphere, tourists find a lot of places for alternative recreation. For example, they go to the local park "Shaboda" ("Breeze"), where you can sit in the shade of the trees by the cool fountain, eat ice cream and just relax. You can also rent a bicycle and try to explore the whole city on your own, that is also good for your health. Another useful way of spend time there is to go to "Hammomi Dovudi" Samarkand bath. Steam room and massage - this is what will help you to relax after a long journey.

Exotic lovers can take a couple of lessons of traditional or Arab dances, feel the national culture and feel like a real eastern princess. For those who are not indifferent to art, there are several theaters where you can watch performances and have a good time. In the evening, you can go to the cinema to watch national or modern movies, and then take a walk in the night city that is especially beautiful in the darkness.

There are a lot of workshops in Samarkand, where various master classes are constantly offered for tourists. You can take children to the traditional craft workshop – molding of a real tandoor in which the most delicious Samarkand bread is baked. Or go to the circus, which touring the cities from time to time. In summer, you can escape from the heat in "Babylon" water park, in "Golden ball" bowling club or in "Babyland" children's amusement park. Attractions, competitions, active time – there is everything that will involve your child for a long time.

While visiting Samarkand, you can buy national stuff both in modern supermarkets and in old shops. You can buy both everyday goods and memorable souvenirs in the modern supermarket "Registan", across from the old eponymous square and in the central department store of Samarkand (TSUM).

But the real abundance of traditional crafts you will find, of course, in numerous workshops in Registan Square. You can buy Uzbek suzane, souvenir knives and skullcaps, dolls, national clothes, Samarkand painted caskets and even musical instruments - tanbur and dutar.

For delicious fruits and oriental sweets, you should go to Siab market. There you will taste the famous Samarkand bread and feel the real Samarkand life.

Where to stay in Samarkand

There is a huge selection of hotels in the city, so each tourist can easily find a suitable option. There are 4-star hotels with high-level service, as well as mini-hotels and guest houses with relatively simple conditions, where you will be warm welcomed. "Samarkand Plaza", "Azia", "Constantine", "Afrosiyob palace", "Regal Palace Samarkand" and others are 4-star hotels. Spacious comfortable rooms, free Wi-Fi, saunas and fitness centers, parking, delicious national and European cuisine are at your disposal, and the most important things is a convenient location near the city's main attractions.

Guest houses that are suit for affordable stay are the same cozy and attractive. Among them there are "Amir Hostel", "Hostel Sim-Sim", "Guest House Marokand", "Timur the Great", and others.

Despite the different prices in expensive, medium and budget hotels, every tourist is served in the best oriental traditions: with sincere hospitality and high respect to the guest.

You can taste all the variety of national cuisine in any restaurant or cafe in Samarkand. The choice is so wide that the eyes run out, and when you smell the tasty smell coming from the kitchen, in anticipation of a delicious dinner it makes your mouth water. Uzbek cuisine is very rich: manti, lagman, tasty mastava soup, mashkhurda, covurdak, naryn, meat and green somsa, chuchvara, shurpa, khanum and of course the "diamond" of Uzbek cuisine is Samarkand pilaf. This traditional Uzbek dish is a must on every holiday table. It is not by chance that there is a saying among the people: "If you have to die - then let it be from pilaf." Every tourist first visiting Samarkand must try the delicious Uzbek pilaf.